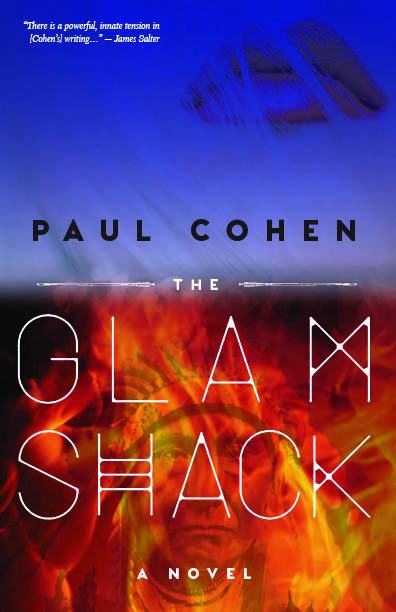 The Glamshack A NOVEL By Paul Cohen

“There is a powerful, innate tension in his writing which comes not only from his voice but from his particular way of looking at things, an unusual way, and in art—in ction—the only real worlds are likely to be the unusual.”
—James Salter

“There is so much to admire in Paul Cohen’s beauty of a rst book. It is smart, sexy, wonder- lled, haunting and oh so marvelously, so humanly strange. Here even meat (venison) can be graceful. Here the heart grows hot, the soul burns dark and Desire blows a thousand horns.” —Laird Hunt, author of The Evening Road

“Funny, intense and brilliant, this is a book about love but also about the self’s ability to with- stand love. Every sentence is poetic, magnetized, in love with life. The language in this book cuts so close to the heart of experience that it feels very much like life itself—sacred, invincible, beautiful, full of meaning.”
—Rebecca Lee, author of Bobcat and Other Stories

“Paul Cohen’s The Glamshack cuts to the quandary we all endure: the burden of desire. With a

voice distinct and resonating, Cohen cast a sober eye on life and longing, love and failure. He personalizes a universal plight and casts a searing spotlight on the fact that we are all uniquely un-unique—that, in the end, we all share the same fate.”
—Douglas Light, author of Where Night Stops

“In his debut novel, Cohen manages the impressive feat of memorably documenting obsession with- out surrendering to it.”
—Kirkus Reviews

Reluctant fashion journalist Henry Folsom is in love with Her, an incandescent beauty whose smile is an Event. The only problem is Her ancé. And She’s going to see him for twelve days, while Henry smolders in The Glamshack, his borrowed Silicon Valley poolhouse and site of their affair. Mesmerized by the American Indian wars and grasping for the divine, Henry must decide what it means to make his Last Stand. Nominated for a Pushcart Press Editor’s Book Award, The Glamshack is a bold, lyrical, darkly humorous novel on love, divinity and the male gaze that echoes early masterpieces of Cormac McCarthy and Martin Amis, but is entirely Paul Cohen.